Why are Applegate’s rules helpful?

If a third molar is missing and is not to be replaced, it is not considered in the classification.

We very rarely would replace third molars and if patients do not have them, then we wouldn’t include these in the classification i.e. they don’t suddenly have free-end saddles.

If a third molar is present and is to be used as an abutment, it is considered in the classification.

This may be in a scenario where a patient is having their first and second molars replaced and so the denture utilises the third molar as an abutment. As a result, the saddle is a bounded saddle and not a free-end saddle.

If a second molar is missing and is not to be replaced, it is not considered in the classification.

This would be the usual cases if the opposing second molar is missing, then we wouldn’t classically replace the second molar as there would be nothing to occlude on.

The most posterior edentulous area (or areas) always determines the classification.

Ultimately, teeth missing in the most posterior areas will determine the classification. Edentulous spaces should first be assessed to see if they fall in to Kennedy Class I. Then Class II, followed by Class III and finally Class IV. This also links to Applegate’s Rule 1 where the class should be decided following extractions, as the extractions may be in the posterior regions.

Edentulous areas other than those that determine the classification are referred to as modifications and are designated by their number. 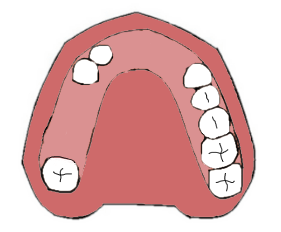 The extent of the modification is not considered, only the number of additional edentulous areas.

It does not matter if there is one or several teeth in an edentulous space with regards to the modification – it is simply the number of spaces.

No modification areas can be included in Class IV arches.

If there are any other edentulous spaces, as the above rules dictate, the denture would fall in to one of the other classes.

The Mental Capacity Act 2005 – A Summary