Periodontitis and gingivitis are inflammatory diseases of bacterial origin. However, pathogenic bacteria alone are not sufficient for their onset and progression. The way the immune system reacts also determines the course of the disease. This post looks at the pathogenesis of periodontal diseases as well as the pathophysiology.

In addition, other local, general, and environmental factors may predispose to their development or influence their severity.

Therefore, periodontal disease is a set of inflammatory conditions that results from the interaction of multiple factors. Individuals are not equal in this regard. Some will experience persistence and moderate inflammation for years, while others will experience rapid tissue destruction.

Destruction of the Periodontal Tissues

Not all bacterial species in the mouth are aggressive. Some of them are friendly and help keep the balance.

They colonise the different mouth surfaces and form the biofilm, also known as plaque. This environment protects and allows them to act in synergy.

Plaque build-up leads to gingivitis, the early stage of periodontal disease. In contrast, periodontitis is not triggered by the plaque amount but by the presence of specific bacteria with high virulence potential. Virulence factors include: 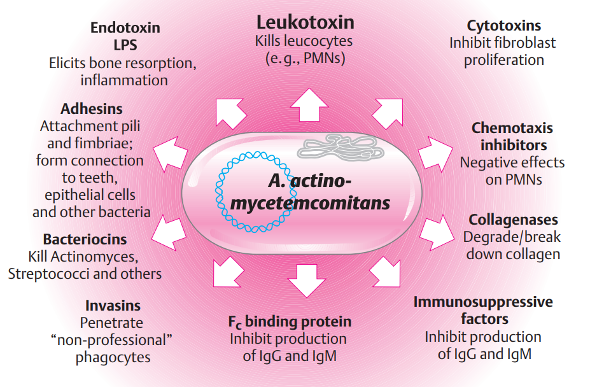 Virulence Factors of A. actinomycetemcomitans (Aa) (2)

The imbalance between the host’s response and bacterial factors leads to the destruction of periodontal tissues.

Different mechanisms are involved in this process:

After a few days of plaque accumulation, virulent bacteria start to grow. They have the common point of being gram-negative with a high pathogenic potential. They include Actinobacillus actinomycetemcomitans, Porphyromonas gingivalis, Tannerella forsythensis, and Treponema denticola.

Bacteria and their products also stimulate the production of cytokines and inflammatory mediators that are highly involved in tissue damage.

The host response protects the periodontium against bacterial aggression. However, large amounts of plaque and highly virulent bacteria can disturb tissue homeostasis, leading to periodontitis.

The immune system sets up two lines of defence to eliminate bacteria.

When toxins and bacterial components (LPS) diffuse through the junctional epithelium, the first to be involved are polymorphonuclear cells (PMNs). They kill invading bacteria through phagocytosis (a mechanism that involves killing and digesting the microorganisms) and produce substances called cytokines.

Cytokines regulate important immune system functions, including inflammation, cell proliferation, growth, activation, and repair. However, when released in excess, they cause tissue damage.

When plaque accumulates predominantly with gram-negative bacteria, PMNs migration increases by diapedesis. Macrophages enhance phagocytosis and present antigens to T and B cells.

After the presentation of the antigen, B and T cells are activated. They proliferate and migrate to the infected site through the bloodstream.

B cells then predominate and mature into plasma cells capable of releasing specific antibodies.

This line of defence takes longer to intervene. However, it has a “memory” function that allows it to act quickly and effectively when exposed to the same antigen a second time.

The interaction between LPS and immune cells (PMNs and macrophages) stimulates the synthesis of inflammatory mediators and cytokines. While these substances regulate the immune response, they can destroy surrounding tissues. Among them: interleukin-1 (IL1), interleukin-6 (IL6), interleukin-8 (IL8), tumour necrosis factor (TNF), Prostaglandin E2 (PGE2), and natrix metalloproteinases (MMP).

-IL1: It leads to the migration of inflammatory cells, but also the destruction of bone and the stimulation of other inflammatory mediators, such as PGE2 and MMP, which degrade the extracellular matrix proteins.

-IL6: Stimulates the production of antibodies and osteoclasts differentiation, which are responsible for bone destruction.

-IL8: Attracts immune cells, stimulates MMPs, and contributes to the destruction of collagen.

-TNF: It had the same activity as the IL1. It exacerbates the inflammatory response.

-PGE2: Produced by monocytes and fibroblasts, it increases bone resorption and MMP release.

– MMP: Bacteria and their products can directly stimulate cells to produce MMPs, which can destroy the extracellular matrix of connective tissue and bone.

The progression of periodontal disease

Plaque build-up leads to inflammation which is a physiological response.

Inflammation involves different cells and biochemical molecules that trigger complex reactions. This will lead to disease progression from gingivitis to periodontitis.

However, it is important to know that inflammation can stagnate and never lead to periodontitis. It all depends on the individual’s risk factors and how the immune system reacts.

-The junctional epithelium firmly attaches the gum to the tooth surface.

-No signs of inflammation.

8 to 14 days after plaque accumulation, bacterial products stimulate epithelial attachment cells and attract PMNs (blue dots). This will send signals to the blood vessels to dilate, leading to inflammation.

As a result, gingival crevicular fluid increases, and PMNs migrate to form a barrier against bacterial plaque.

There is an initial alteration of fibroblasts, collagen fibres, and junctional epithelium that starts to proliferate laterally.

Clinically, signs of gum inflammation are seen, including redness, swelling and a tendency to bleed.

3 to 4 weeks after plaque accumulation, the previous phenomena intensify. The junctional epithelium retracts in its coronal part, pushed back by the growing plaque, but without causing any attachment loss. This leads to pseudopockets formation.

The lateral proliferation of the junctional epithelium continues to form a barrier against the progressing bacteria.

The inflammatory infiltrate increases with a significant infiltration of plasma cells. The deterioration of fibroblasts and collagen fibres worsens, but the bone is not yet affected.

Clinically, there is a high amount of plaque, pseudo pockets, and pronounced inflammation.

This stage may persist for years without progressing to periodontitis.

This is where gingivitis turns into periodontitis. The pocket epithelium proliferates and migrates apically, forming true periodontal pockets. The degeneration of the underlying gingival fibres leads to a loss of connective tissue attachment. The bone is also affected by the inflammatory infiltrate and gradually resorbs.

The inflammatory infiltrate continues to expand with a predominance of plasma cells. Excessive exudation, sometimes purulent, may occur.

This stage refers to the formation of periodontal pockets and the onset of periodontitis.

Untreated periodontitis progresses at different rates, depending on the individual risk factors. Knowing the type of periodontitis is necessary, but it is also essential to identify the pattern of bone loss and the severity of the attachment loss. This allows us to establish the prognosis and estimate the degree of treatment difficulty.

This is the most common type of bone loss. The bone is reduced in height, and its edge is parallel to the line passing through the cementoenamel junction of the two adjacent teeth.

It occurs especially in chronic periodontitis. Panoramic and retro alveolar radiographs can reveal the extent and severity of the damage.

When bone loss progresses in an oblique direction or its edge is not parallel to the line joining the cementoenamel junction of the two adjacent teeth, the bone lysis is vertical.

In most cases, vertical bone loss results in infrabony pockets, which means that the bottom of the pocket is in an apical position to the bone.

Risk factors are characteristics that, when present, increase the probability of the disease occurrence, and decrease this probability when absent. There are local, general and environmental risk factors.

-Iatrogenic factors: An ill-fitting filling or crown can affect the periodontal tissues and increase the risk of periodontitis.

These include all behaviours, habits, and environmental characteristics that may affect the immune response or increase the risk of periodontal disease. Among them are stress, smoking, nutritional deficiency, and low socioeconomic status.

Dentistry In A Nutshell Review